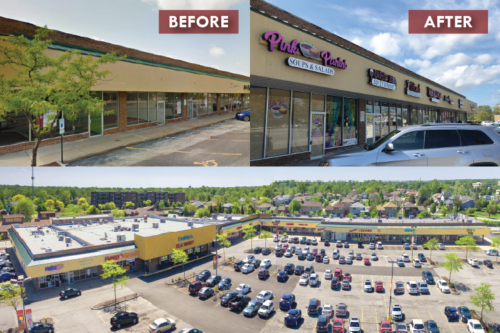 When Matanky Realty Group took over leasing for Hazel Crest Center in 2014, the property was only 70% occupied and had 14 vacancies. Though many of the tenants were well-performing long-term tenants, the retail categories did not promote cross-shopping.

Matanky knew they had to target specific tenant categories that would be the building blocks for future tenants.

They initiated leases with Flavor Brunch, an award winning south suburban restaurant, and a popular local hair salon. Both of these tenants filled the parking lot with female shoppers, which they were able to market to other tenants.

Matanky’s leasing velocity accelerated as their plan became more concrete. Their marketing and sales strategy generated leases with Wired: The Boutique, Whip It Sip It Paint, Marvella Rose Formalwear and Arched among other tenants.

Matanky Realty Group continues to handle the leasing responsibility for the center, which now sits at 89% occupied. Through the addition of 17 tenants and 35,000 square feet leased, they increased the value of the asset by over $2 million. Hazel Crest Center is now a bustling retail center serving the community’s daily needs and services.